Archaeological evidence shows that people have settled on the banks of the River Dee since Mesolithic times more than ten thousand years ago.

The oldest known settlement is at Birkwood where Mesolithic micro flints over seven thousand years old have been found. Around 8000BC two of the largest and earliest known timber halls in Europe were built on both sides of the River Dee at Balbride and Crathes. 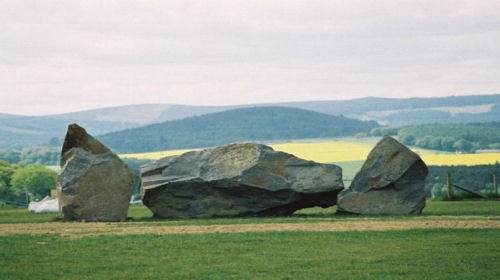 We know that there was some occupation in Neolithic, Bronze Age and Iron Age times from the burials and artefacts which have been found. There are several Bronze Age burial sites in the area, the most well known being at Cairnshee and Bucharn Cairn.

Several Stone circles were built in the area around 3000BC. Unique to this part of North East Scotland are recumbent stone circles. The recumbent stone lies horizontally and is flanked by two upright sentinel stone which are often of a different type of stone.

The Nine Staines, in Mulloch Wood, three miles south east of Banchory, is a fine example of a recumbent Stone Circle.

Around 2000BC tribes of Picts and Celts arrived in the area, building crannogs and souterrains for protection.

In 300AD Romans came to the area. There are traces of a watering camp where the River Cannie flows into the Dee.