In the eighteenth century the terror of the body snatchers reached Banchory. 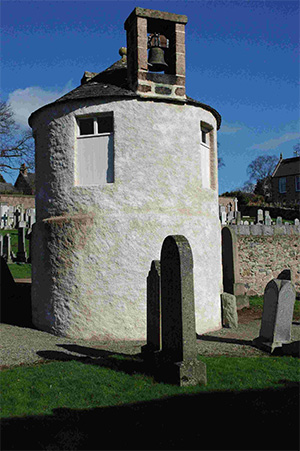 A watchtower was built in the Graveyard and families stayed overnight in the watchtower to stop the 'body snatchers' from digging up their loved ones' bodies for the use of medical students.

The tower has four windows, a fireplace and a bell which Guards would ring to raise the alarm if the body snatchers approached. The Watchtower was recently restored by men from the East Parish Church with help from local craftsmen.

The Watchtower is only 10 - 15 minutes walk from central Banchory along the Deeside Way, which follows the old Railway Line route to Crathes.  Should you wish to drive, there is a car park at the entrance to the kirkyard, just off Station Road.