From Small Settlement to Victorian Town

The 19th century brought considerable changes to Banchory. Pre 1800 it was a small rural village sited around the area now called the Glebe extending up the hill towards the East Church and around what is now Raemoir Road.

The coming of the first toll roads saw the extension of the village west to form New Banchory and the present High Street. 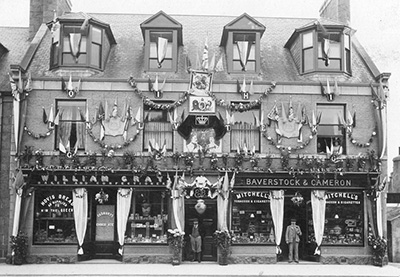 Turnpike roads were constructed throughout Scotland in the 1800's, and as a means to improve roads, travellers were charged for use of the roads.   Toll houses were built to catch the passing traveller.  They were small rounded buildings with windows facing both ways along the road.  The former toll house at the Bridge of Feugh is a fine example.

A few far sighted men saw the advantages brought by the improved road to Aberdeen and they bought land along its route. One of these men was John Watson who owned the area which is now between the High Street and Burnett Road. It was the ideal location for wealthy professionals who built large homes in Station Road, Watson Street and Ramsay Road, with wonderful views across the valley towards Scolty Hill and Kerloch.

The coming of the railway from Aberdeen in 1853 further stimulated the growth of the town.   Information about the railway and archive photos of Banchory Station can be found at the Royal Deeside Railway website.

Over the years the Council raised funds to purchase a fire engine, provided street lights, built a library and supplied coal and essential food items to the poor.  Their major success was the construction of the Town Hall in 1872, built entirely through public subscription.  By the end of the 19th century the Town Council had constructed and was managing the gas lit lamps, the sewers and water supply, the roads and footpaths and a number of urinals. In the early 20th century houses for rent were constructed on Raemoir Road.