In the mid nineteenth century a new approach to treating tuberculosis was established in Germany. Patients were treated in the open air until their fever subsided.

Dr David Lawson of Banchory had become interested in the treatment of tuberculosis and visited Germany to see the new approach for himself. In 1899 a group of Scottish physicians recommended Banchory as the most desirable place in Scotland to build a sanatorium because of the dry sunny climate, the beneficial vapours from the pine trees and over 2.5% ozone in the air. 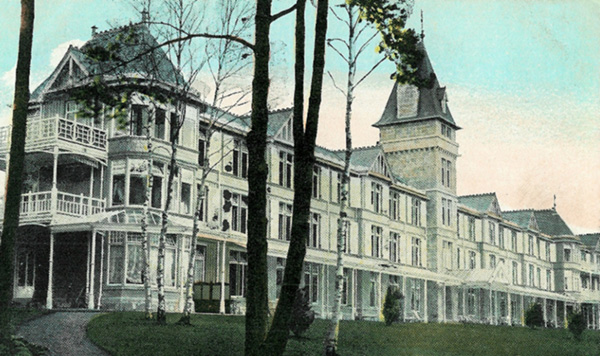 On Christmas Eve in 1890 Dr Lawson opened the Nordrach-on-Dee sanatorium with accommodation for 40 patients. The building was designed along similar lines to the German sanatorium and was constructed of timber from the Black Forest in Germany and local granite from the Hill of Fare. It soon gained a very good reputation for the treatment of tuberculosis and the accommodation was increased to take 75 patients.

“It is essential for patients to spend the whole of their time in pure air. In order that they may do this with a maximum of comfort, the buildings have been specially designed. All bedrooms face south, and are heated by steam pipes, lighted by electricity, and fitted with hot and cold water supply; the floors being covered with a material which readily ensures absolute cleanliness. Adjacent to the commodious dining room are the Winter Garden, the writing room, and the library, which contains over 3000 volumes in addition to a wide selection of current papers and magazines. The Technical Equipment includes Laboratory, X-ray Department, Light Room, Throat Room, Dental Room, Examination and Pneumothorax Room” 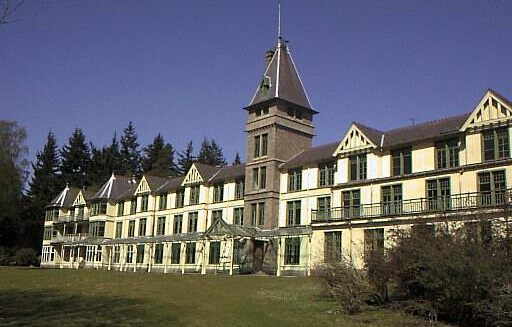 In 1917 Somerset Maugham was a patient and he based his short story “Sanatorium” on his experience.

In 1934 the sanatorium was no longer required and it was sold to become the Glen O’Dee Hotel. “The Royal Deeside Hotel is in every way a perfect holiday centre. For sportsmen too, who are attracted by the moor or river, it is an ideal centre. Within the grounds are secluded walks, a mashie course, putting greens and facilities for lawn games; tennis, bowls and all facilities for shooting and fishing. The winter climate is unusually mild.”

During the Second World War the hotel was requisitioned for the war effort as a billet for troops. Following the war the Scottish Red Cross bought the buildings for use again as a sanatorium for ex-service men suffering from tuberculosis. It was handed over to the people of Scotland by the Red Cross in the 1950’s and became a National Health Service convalescent hospital in 1955, known as the Glen O'Dee Hospital.

The original building was closed in 1990 when a new hospital unit was constructed close by. As the hospital was a listed building it remained in its original condition awaiting refurbishment. It featured in the BBC’s Restoration programme in September 2003.

The Friends of Glen O’Dee published a short history of the hospital to celebrate its centenary in 2000 with all proceeds going to support the work of the New Glen O’Dee Hospital. If you would like a copy please email info@banchory.org